MAY 25, 2010
1. COFADEH received the report of this at 4:30 pm, Tuesday, May 25, 2010: armed men dressed in white shirts, with black pants and caps violently entered STIBYS, and immediately fired on Douglas Gomez who is now in surgery at the Social Security Hospital in San Pedro Sula.
2. The action occurred in a synchronized manner with the blocking of the telephone lines, which did not work when the four persons, including Douglas, inside the union facility tried to sound the alert and get help from outside. The unknown assailants did not take anything from STIBYS.
3. COFADEH is concerned with this new repressive action against STIBYS and its leaders Carlos H. Reyes and Porfirio Ponce, who since the coup d’etat have been the victims of constant aggression, surveillance and militarization against the organization by the repressive bodies of the State
Posted by La Voz de los de Abajo at 2:39 PM No comments: 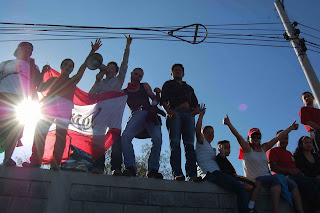 Solidarity and Human Rights Delegation to Honduras - January 24-31, 2010
Seven people travled to Honduras to accompany the resistance as human rights observers in solidarity with the people of Honduras against the coup d'etat. We interviewed individuals, organizations and communities in resistance from San Pedro Sula, El Progreso, Siguatepeque, La Paz, and Tegucigalpa. the delegation presented our findings on the serious and deteriorating human rights situation in Honduras to the US Embassy and held a press conference in Tegucigalpa. The delgation accompanied the grand march of resistance on January 27th, the day that the new coup government of Pepe Lobo assumed power. The march of 300,000 people in resistance went to the Tegucigalp Airport to salute President Mel Zelaya who left the country on the same day. The Resistance remains massive, peaceful and resolute.
See Honduras_Resists blogspot for more detailed reports.
Posted by La Voz de los de Abajo at 5:43 PM No comments: