NOTE: La Voz de los de Abajo has visited this community, named after Father James Carney, many times . We are extremely worried and are trying to reach the community for an update. As soon as we have any news we will communicate it. Attached are some photos of the community from our 2000 delegation.

To the international community and press. The community of Guadalupe Carnei in Silin, Trujillo, in northern Honduras is at grave risk of a massacre at the hands of the army and the golpista police.

As of the afternoon of July 18, the XV Battallion and the police, have the community surrounded and have begun to tighten the circle, meanwhile police helicopters are flying over the community. In the past there have been attempts to assault and forcefully take over the community .

Gualalupe Carnei is a campesino community that has been a part of the process of agrarian reform since its founding in 2000, and has been subjected to continuous harassment by the military. This has intensified since June 28, the day of the coup d’etat.

In recent days the pro-coup newspaper, The Heraldo, published that there is a guerrilla cell in the community, without a doubt attempting to create conditions to justify a massacre.

The golpistas discourse, begun by the Cardinal, stating that Zelaya must not return to the country in order to “avoid a blood bath” is well known. All of this indicates that they are preparing massive and bloody attacks.

We ask that President Arias be asked why he has never mentioned the repression against the Honduran people resisting the coup, why has he never proposed measures to stop the grave violations of Human Rights occurring in this country.
Posted by La Voz de los de Abajo at 8:02 AM No comments:

The Honorable Roland Burris
Senator for the State of Illinois
Senate, United States of America

Having just witnessed today the intransient position of the de facto government of Honduras towards the political dialogue in Costa Rica cause the failure of that process, we are writing to insist that the United States follow its own laws and the spirit, as well as the letter, of the international community’s condemnation of the coup d’etat in Honduras.

This letter is to request that you, our representatives in the U.S. Senate, take the lead in insuring that the U.S. State Department to do the following:

1. Follow U.S. law, which calls for all aid, other than humanitarian, to be cut off from any government "whose duly elected head of government is deposed by military coup or decree”. The fact that the military is in partnership with the Micheletti de fact government does not alter the fact that the government of President Zelaya was deposed by military action, not parliamentary or judicial action and that the country has been totally militarized and that the de facto government is being maintained in power through that militarization. No further aid should be given to Honduras until the full restitution of the constitutional government of President Manuel Zelaya Rosales.

2. Call for an end to repression and abuses of human rights by the de facto coup government and an investigation of the abuses, including the murders of Isis Obed Murillo, the 19 year old killed when troops opened fire on a demonstration in support of Zelaya’s return to Honduras on July 5thand the two well known trade unionists and leaders of the Popular Block (Bloque Popular), Roger Bado and Ramon Garcia as well as the thousands of detentions, hundreds of arrests and the violence against so many Honduran citizens.

2. Break off all governmental relations with the de facto coup government and withdraw the U.S. ambassador from Honduras immediately. Impose economic and political sanctions against the coup government.

3. Investigate the finances in the U.S. of the key coup figures in the military and in the de facto government and freeze any accounts and activities that are a part of their illegal activity.

3. Request a public accounting from Ambassador Hugo Lorens and from the Department of State regarding what information was known about the planned coup prior to June 28th and what signals were given to the Honduran military and other coup plotters.

We believe these are the minimum actions immediately necessary; indeed they should have been taken on June 29th. Not taking at least these actions makes the United States appear complicit with the illegal coup and its violent suppression of the Honduran people. Indeed, the United States should feel the weight of responsibility for the Honduran people’s well being, for its actions and inactions thus far. It is not enough to make rhetorical statements in support of the legitimacy of President Zelaya.

Open Letter
In Support of the Resistance to the Illegitimate Micheletti Government in Honduras.

The actions on July 16 -17th are called in response to the refusal of the Micheletti de facto government to step down and the lack of any effective international action by governments or organizations such as the UN, OAS, to resolve the situation and return President Zelaya to Honduras.

Repression and violence against the resistance continues. Nearly two thousand persons have been detained, for curfew violations, for participation in demonstrations, and as part of the crack down against organizations and independent media opposed to the coup.

The de facto illegitimate government is doing everything possible to keep the truth away from the Honduran people and the international community. Independent media have their power cut when they are on air; facilities shut down; detentions and threats made against journalists and on Sunday, July 12th, correspondents from TeleSUR, the only major international television journalists broadcasting live from the streets of Tegucigalpa were expelled from the country.

Increasing violence against the Honduran people by national police and army is well documented, including the murder of Isis Obed Murillo, the 19 year old killed when troops opened fire on a demonstration in support of Zelaya’s return to Honduras on July 5th. Two well known trade unionists and leaders of the Popular Block (Bloque Popular), Roger Bado and Ramon Garcia were assassinated this past weekend in murders that, just like the coup itself, take us back to the dark days death squads and dictatorships.

For all these reasons the people of Honduras through their organizations and their President, Manuel Zelaya, have called for peaceful insurrection.

We, religious, social justice, and immigrant organizations in Chicago support their call and their demands:
**Reinstate Manuel Zelaya, the only legitimate President of Honduras – Bring the coup-makers to justice.

**End all the repression against the people, their organizations and the independent media now!

**In the U.S. we call on our government to immediately end all aid to Honduras now and to withdraw the U.S. ambassador from Honduras and cut all relations with the de facto government.
Posted by La Voz de los de Abajo at 8:11 AM No comments:

Latino immigrant leaders urge bolder actions by the U.S. in support of democracy in Honduras

Latino immigrant leaders urge bolder actions by the U.S. in support of democracy in Honduras

Chicago, IL – Leaders of the National Alliance of Latin American and Caribbean Communities, a national umbrella representing hundreds of grassroots immigrant led organizations from around the country, called on President Obama to take bolder actions in favor of democracy in Honduras through a letter sent to the U.S. Secretary of State Hillary Rodham Clinton. Specifically, NALACC leaders called for the U.S. government to cut off all economic and military aid to the de facto government of Honduras, as well as for the withdrawal of the U.S. ambassador from Tegucigalpa.

“The U.S. role is crucial if we are to see the restoration of the democratic and constitutional order in Honduras,” stated Angela Sanbrano, NALACC’s President. “For as long as the leaders of the de facto authorities in Honduras believe they can count on U.S. support, they will resist the return of President Zelaya, who is the only legitimate head of state of Honduras,” added Ms. Sanbrano.

The U.S. government proposed a mediated solution to the democratic and constitutional crisis in Honduras and succeeded in recruiting the President of Costa Rica Oscar Arias as the lead mediator of the efforts to bring about a solution to the Honduras crisis. “If the good offices of President Arias from Costa Rica are to be successful, it is imperative for the U.S. government to put its full diplomatic weight behind President Arias,” stated Oscar Chacon, NALACC’s executive director.

For Latin American immigrants in the U.S., respect for democratic rule is crucial for the consolidation of democracy and for the efforts to bring about a new social and economic order capable of turning Latin America into a region characterized by well being and prosperity for the majorities in need. The coup d’état in Honduras represents a major threat to the fragile democracies of Latin America.

###
NALACC is a network of immigrant-led organizations working to improve the quality of life in their communities, in the United States, as well as in their countries of origin. Visit us on the web at www.nalacc.org
Posted by La Voz de los de Abajo at 8:08 PM No comments: 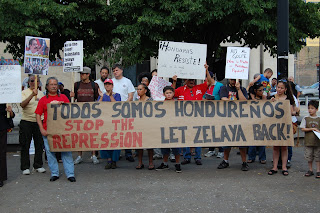 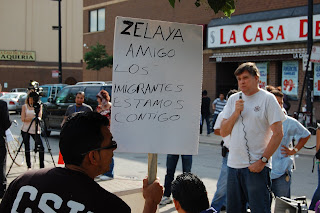 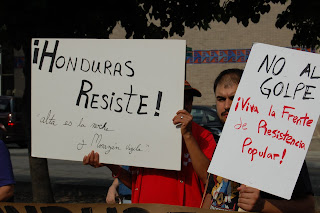 Alegria is a long-time campesino and agrarian reform leader. He was the head of Via Campesina’s Central American region, former national congressman and a founding member of the left party, Democratic Unification Unificacion Democratica (UD), a leader of the campesino organization, the National Center for Rural Workers (CNTC), and is an advisor to President Mel Zelaya on land reform. Alegria spoke with us from Tegucigalpa:

“All the people are mobilizing for struggle. The repression has not broken the spirit for struggle of the Honduran people”.

“On Sunday there was violent repression against the people not only in Tegucigalpa but also in many other places. In the second most important city in Honduras, San Pedro Zula, there were big protests that were terribly repressed. The repressive bodies of the government are searching for leaders of different organizations in a general witch hunt throughout the country“.

“ The repression has been terrible, but the people are continuing to protest” A general work stoppage has been called today to protest the situation and the teachers and educational workers’ participation has forced most schools to cancel classes. Later this afternoon there will also be a big protest in Tegucigalpa”.

“We need your support and help. We need solidarity and economic help to continue the resistance, and we need people living in the United States to pressure President Obama to take stronger measures against the golpista government. We need the United States to withdraw its ambassador from Honduras and to cut all the military and economic aid to make it clear that the coup does not have support from Washington D.C.” 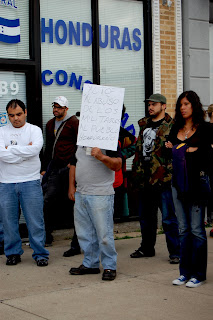 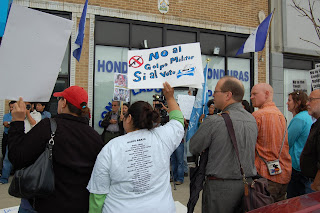 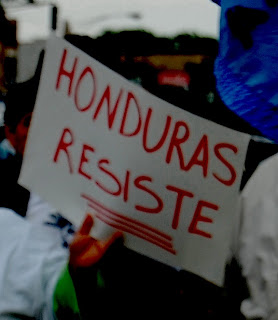